It's our 15th birthday party and we've decided to celebrate in gargantuan fashion by inviting over from New York the legend that is DJ SPINNA. He is a huge inspiration for us all at Soul Buggin' and we can't wait for this one.

Our venue for this event TRADE (formerly Market Bar), has been renovated, redesigned and installed with a full Funktion One soundsystem to turn it into a proper dark basement space to get down to underneath the busy streets of Nottingham.

DJ Spinna is something of an anomaly in music.  A humbling example of what it takes to truly succeed within the framework of multiple fields.  With a steadfast work ethic, an obsessively extensive vinyl library and the willingness to pursue the full extents of his roots (Funk, Soul R&B and Jazz), foundation (Hip-Hop) and future (Electronic/Dance music) without any restraints.  A cornerstone of Hip-Hop’s late 90’s indie-uprise, DJ Spinna made much of his first impression on listeners as the musical background of his group The Jigmastas (having released an impressive slew of 12” singles on his then self-run label Beyond Real during this time) as well as providing the canvats for an array of that era’s lyrical giants including Eminem, Mos Def, Talib Kweli, Pharoahe Monch and De La Soul.

Turning heads throughout the industry, Spinna has produced and remixed a multitude of artists that are too many to list but take in such heavyweights as Mary J. Blige, Michael Jackson, Donald Byrd, Eddie Kendricks, Betty Carter, Roy Ayers and Al Jarreau and so many more. These releases resulted in the signing to BBE records in 2002 where Spinna released his cult classic full length production LP “Here To There” which crossed multiple genres and garnered the attention of serious music fans worldwide.

Yet of all accomplishments, nothing compares to DJ Spinna’s celebrated Stevie Wonder inspired WONDER-Full DJ performances. The success of these events have led to several collaborations between Stevie Wonder and DJ Spinna including remixes for “My Love Is On Fire"  and “Sweetest Somebody” from Stevie’s 2005 “A Time To Love” release. Most notably, in October 2012 Spinna performed an opening DJ set for the “United Nations Message Of Peace Concert with Stevie Wonder” including appearances by Sting, Janelle Monae, Varlerie Simpson, and other luminary artists.

DJ Spinna in The Lab (London)

When Stevie Wonder turned up at DJ Spinna's "Wonderfull" party

What is the Handling Charge for?

To ensure tickets are delivered safely and securely and to keep the price as low as possible for you, the ticket buyer, Soul Buggin' generally uses our E-ticket system unless otherwise stated.

For this service we charge a small Handling Fee to cover the debit/credit card processing fees, customer services, processing and distribution of tickets and our secure server costs. We always try to keep these costs to an absolute minimum. If you feel at any time that our prices are not fair or competitive we'd be happy to hear from you.

If you have ordered physical paper tickets there is a further Delivery cost added to cover the delivery of your order through the Royal Mail network.

We always endeavour to keep these costs as low as possible to merely cover the costs of postage. We only charge you one Delivery cost per order so if there is a big group of you recommend purchasing larger amounts in one order.

When you purchase tickets through Soul Buggin', the full face value of the ticket is shown. This price is the price set by the event promoter and we pay this full amount to the promoter without any deductions. 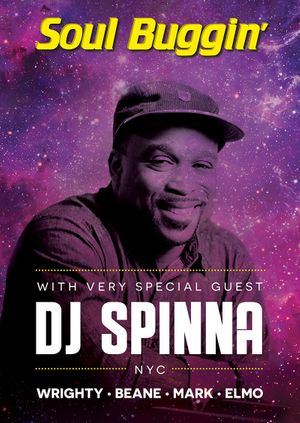 Soul Buggin’ is a DJ collective based in Nottingham consisting of local selectors Beane, Wrighty, Mark A & Elmo. Our record collections span some 5 decades and take in all manner of soulful goodness and together we put on Nottingham’s finest little disco in Nottingham.